Skip to content
Honestly speaking I am not a sports addict, so definitely not the best person to be writing this post. Infact I have a love for aesthetics and am better off writing or painting! But for a change I was very glad to be a part of the Football tournament this year. You will ask why? Well there was so much excitement around this event – everyone was so charged up and the canteen buzzed with talks of who is in which team etc and I was missing out on all the action, so I enrolled myself to see what the fuss was all about.

And guess what? It paid. Well fortunately for me, I was part of the team which won the runners-up trophy! And I won an individual medal – my first sports win ever!

The match took place in the nearby HIDCO Ground located just behind our Kolkata office complex. There were five teams who participated – Teams A, B, C, D and E. The tournament started with the league matches and after a series of qualifiers, the top two teams went on for the finals. The ultimate face-off was between Team C efficiently captained by Ranjit Shaw and Team D led by Sumanta Sen. Team C emerged as the Winners and Team D (including me) was announced Runners-up. 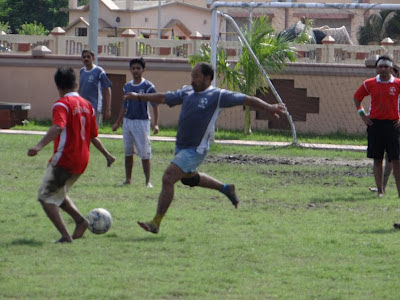 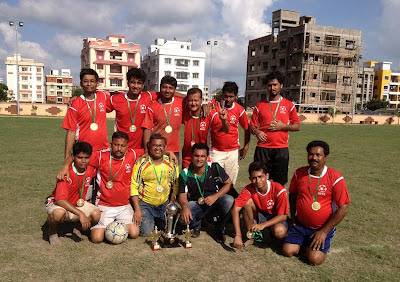 Given that I played for hardly 5 -6 minutes (given my disposition with sports!) and was mostly in the outfield I managed to get a birds-eye view of all the incidents on-field. Well this happens only if you are one of the lucky few!

So here I am sharing the most memorable and comic moment of the event – in one of the qualifiers, my friend Sourav Das was so excited that he forgot which side he was playing for! His teammate Gopal Das managed a great shot and might have scored a goal if it were not for Sourav who saved it – forgetting that he was not the defender of the opponent team but the striker for his own team!

What I want to mention is that the idea of these events are not just playing or showing great football skills, instead we were there to have some fun. I am sure everyone enjoyed themselves thoroughly. So – come one come all – play next year and you might get as lucky as me!

Truly a day with a difference!

Abhisek Gupta is Executive – Human Resource at eRevMax and is responsible for recruitments and HR operations. Abhisek is based out of Kolkata and can be reached at abhisekg@erevmax.com